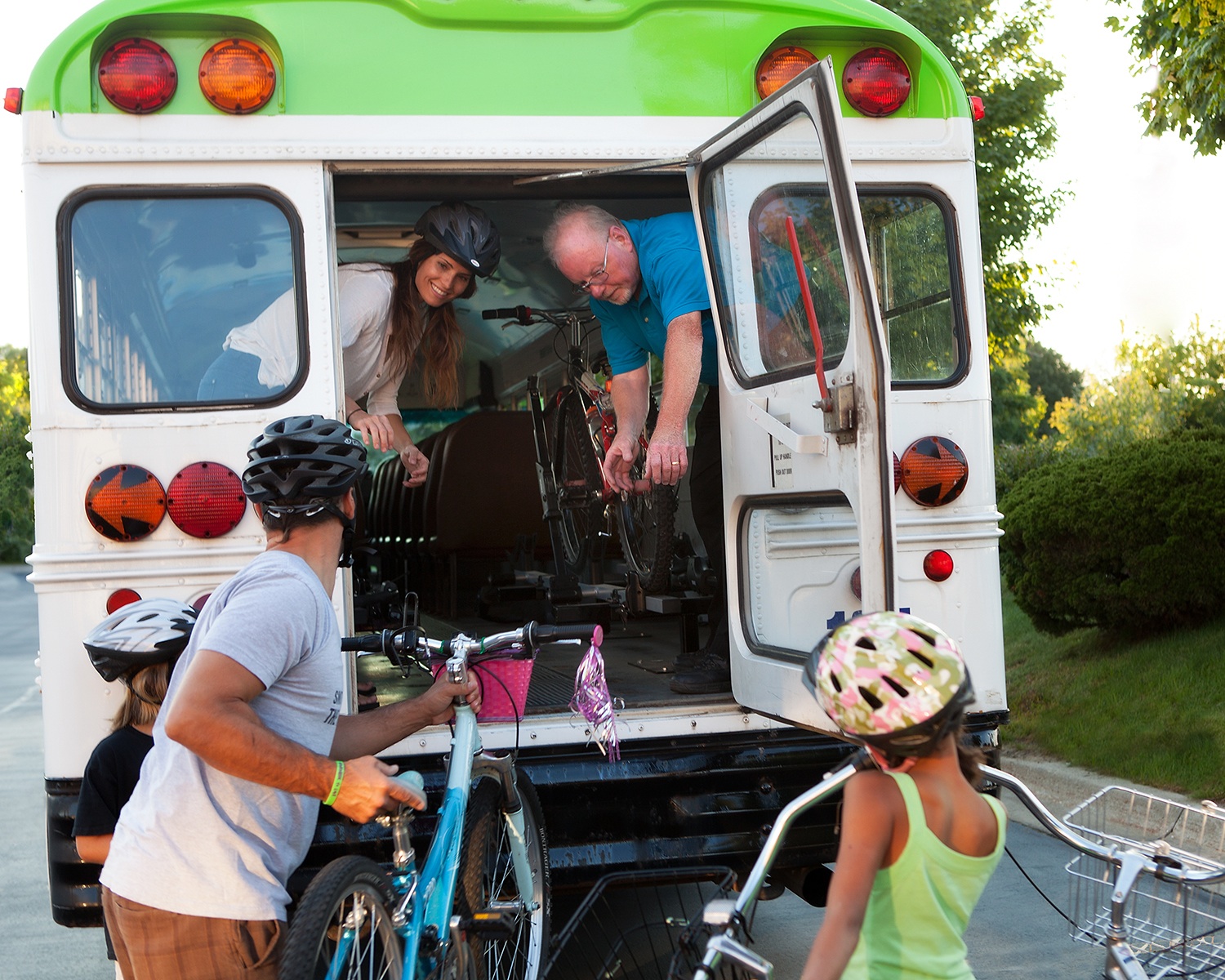 BATA’s Bike-n-Ride program, allowing cyclists to pedal paved trails one way and ride the bus back in Grand Traverse and Leelanau Counties, is in its second season this summer – and it’s growing. Due to its popularity and demand for more service, a new Loop route has been added as well as additional weeks of service.

Last summer, BATA introduced the seasonal bike transportation program, servicing the Traverse City-Suttons Bay Loop route (Route 10) and TART’s Leelanau Trail. Bike-n-Ride is one of very few such programs in the U.S. and serviced 477 bicycles in its first two months of service, July and August of 2013.

Due to the success of the inaugural year, BATA has added a second Bike-n-Ride route, Traverse City-Glen Arbor/Empire Village Loop (Route 11). This allows for riders to bike the newly paved Sleeping Bear Heritage Trail between Glen Arbor and Empire and ride the bus to any other stop along the route.

“In addition to offering a fun leisure activity, the Sleeping Bear Heritage Trail is intended to be a meaningful transportation alternative,” states Tom Ulrich, Deputy Superintendent of Sleeping Bear Dunes National Lakeshore. “The new Bike-n-Ride route makes it even easier for visitors to leave their cars behind, reducing carbon emissions, easing parking congestion, and keeping the park picturesque and welcoming for future generations.”

In addition, the schedule expands into June as well as servicing the city of Northport, as follows:

“We have always intended to gradually increase our service locations and dates, and it’s been easy to do so because of the huge success of Bike-n-Ride’s inaugural year,” shares Doug Dowdy, BATA Transportation Services Manager. He and a select group of people representing BATA, TART Trails, Michigan Land Use Institute, and the Village of Suttons Bay were the driving force behind Bike-n-Ride’s development. “The number of passengers served in 2013 was above expectations. And it shows that our population is ready for more smart transportation options.”

Local bike shop owners have been key partners for BATA to spread the word about Bike-n-Ride to their customers. Brick Wheels owner Tim Brick echoes those sentiments. “The BATA Bike-n-Ride program is a spectacular partnership,” says Brick. “So many of our out-of-town guests would love to ride the Leelanau and Heritage Trails, but often times the trails are more miles than they care to take on. What’s great about biking there and busing back is that it’s not that far – it’s flat and it’s a blast.”

The one-way bike trips are approximately 17 miles between Traverse City and Suttons Bay on the Leelanau Trail, and 11 miles between Glen Arbor and Empire on the Sleeping Bear Heritage Trail. The Bike-n-Ride buses allow for 11 bikes to be transported – at no cost. Riders will be charged a $3.00 per-person fare that can be paid on the bus in cash (debit/credit cards not accepted) or with a BATA FlashFare card (details on that program here).

For the Suttons Bay/Northport Loop route, BATA will provide every-other-hour Bike-n-Ride service on weekdays beginning at 5:00 a.m. and ending at the Hall Street Transfer Station at 7:50 p.m. For the Glen Arbor/Empire Loop route, weekday service will allow for three runs. The weekends offer three runs per Loop route. Complete schedules with map can be found at bata.net/bikenride or by calling BATA at 231.941.2324.

Bike-n-Ride is not an express service; the bus will make regular Loop stops. This is a first-come, first-served program, so arriving early for pick-up is advised. More info at bata.net/bikenride.

About BATA
With over 120 employees, BATA provides more than half a million annual rides to residents and visitors in Leelanau and Grand Traverse counties. After an extensive study, the organization launched major service and route improvements in May 2013. These enhancements, including “Loop” (fixed routes) and “Link” (zone) services, were designed to better meet residents’ daily transportation needs. Visit bata.net or call 231.941.2324 for more information. 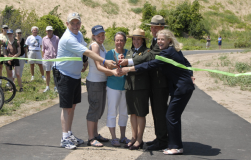 Celebrate the opening of the Dune Climb to Empire segment at the ribbon cutting ceremony on Wednesday, July 2, at 10 am at the Dune Climb. The Empire segment more than doubles the miles of trail bringing the total to 9.5 miles.  You can check out the newly installed donor recognition plaza too! 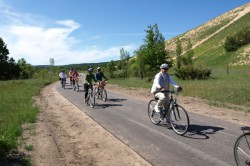 The next 5.5-mile segment of the Sleeping Bear Heritage Trail from the Dune Climb to Empire is expected to open by July 2014. As part of the project, a donor recognition plaza will be constructed at the base of the Dune Climb to recognize donors of $1,000 or more. Donations received by May 5, 2014, will be included in the plaza this summer. After May 5, names on the donor wall will be updated once each year until the entire 27-mile long trail project is complete.

In addition, donors of $5,000 or more will receive a limited edition signed print of an illustrated trail map created by well-known local artist Glenn Wolff. To support continuation of the trail, or learn more about the Sleeping Bear Heritage Trail please visit www.sleepingbeartrail.org or contact Pam Darling, Development Director for TART Trails (pam@traversetrails.org or 231-941-4300). 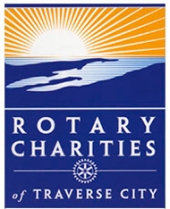 Thanks to Rotary Charities for awarding a $50,000 challenge grant to The Sleeping Bear Heritage Trail for Phase II! Through this grant, new donations will be matched dollar-for-dollar up to $50,000. This is a great opportunity for new donors to maximize their impact, and current donors to make an additional donation to move up giving levels before the donor recognition plaza is constructed in spring. To learn more about the project and donation opportunities, contact Pam Darling at 231.941.4300 or pam@traversetrails.org

Thanks to the Northern Express for calling the SBHT “A Crown Jewel Among Trails!” The trail plans for the next two years are exciting, but we cannot do it without your support. Please consider a year-end donation.

Visit this link to read the article.