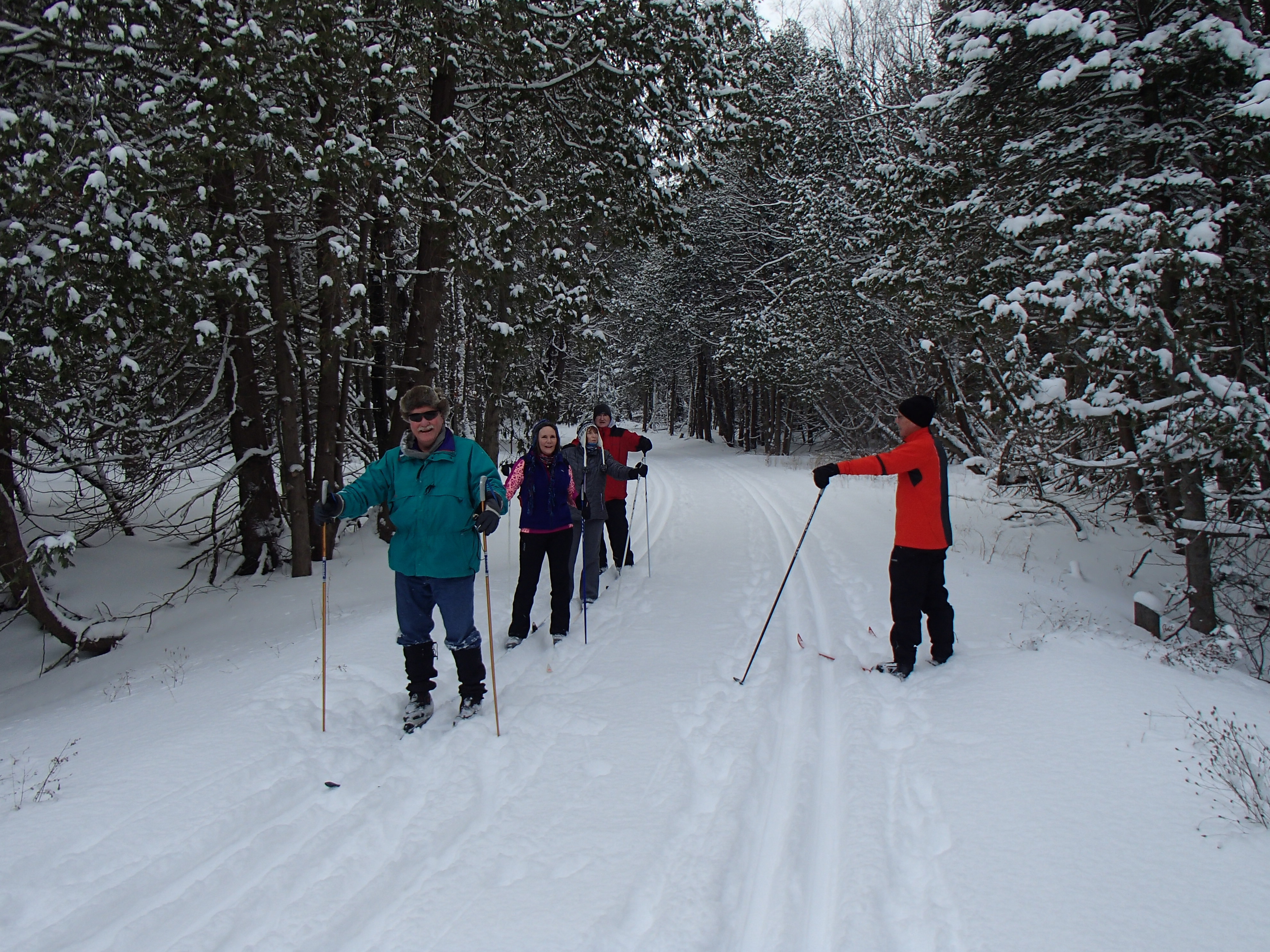 Winter is an amazing time of year to enjoy the Sleeping Bear Heritage Trail. The trail is groomed for classic cross country skiing, skate skiing and snowshoeing between Glen Arbor and Empire. 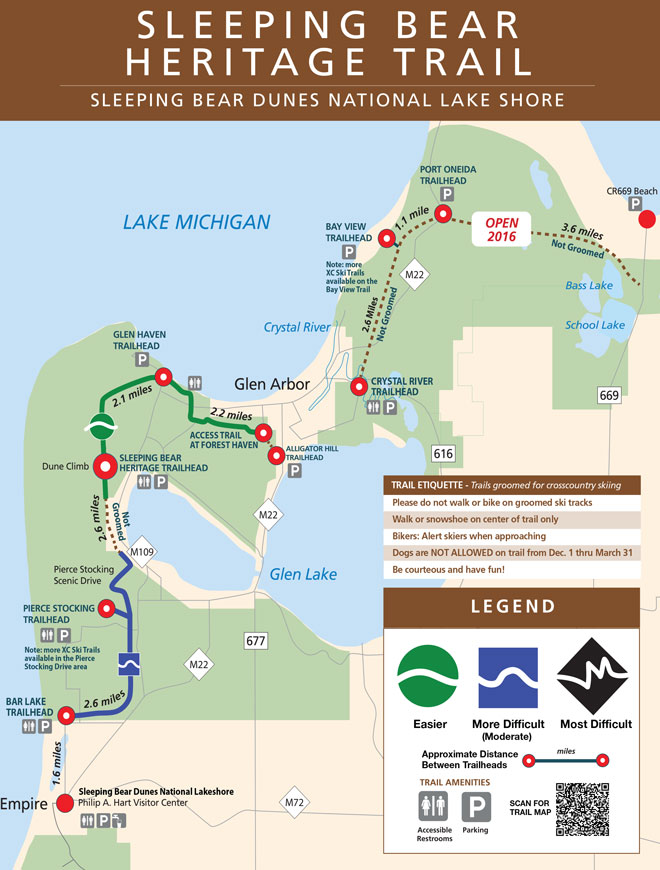 Friends of Sleeping Bear Dunes manages the maintenance and grooming efforts on the trail. They have a grooming crew comprised of 20 volunteers who groom the trail between Forest Haven Road in Glen Arbor to the corner of Voice and Bar Lake Roads just north of Empire for a total distance of 10 miles. The trail north of Glen Arbor, from Crystal View Trailhead to Port Oneida Road is not groomed but is open for back country and snowshoeing. 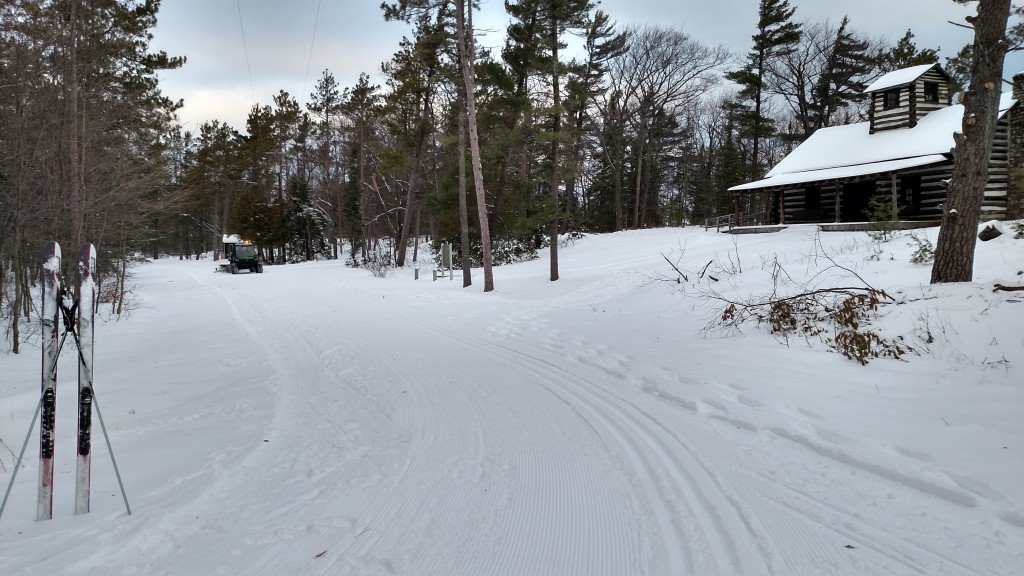 The highest prioritized section of trail groomed is between Glen Haven and Glen Arbor with a loop through the DH Day Campground. This section typically sees the most winter use.

The next section groomed is from Glen Haven to the Dune Climb. The trail is fully groomed from the Dune Climb to Empire when there are enough volunteers and the weather and temperature are ideal.

Grooming at temperatures above 30 degrees results in icy conditions, so grooming is more likely to occur when temperatures are cooler. When the trail receives over six inches of fresh snow with temperatures under 30 degrees, groomers use the roller to compact the snow and build base. When there is a compacted base the Ginzu Groomer is used. It has a set of knives that churn up the hard pack snow to create a new corduroy layer. Both sets of equipment have track-setters for making classic tracks on the outside of the trail. 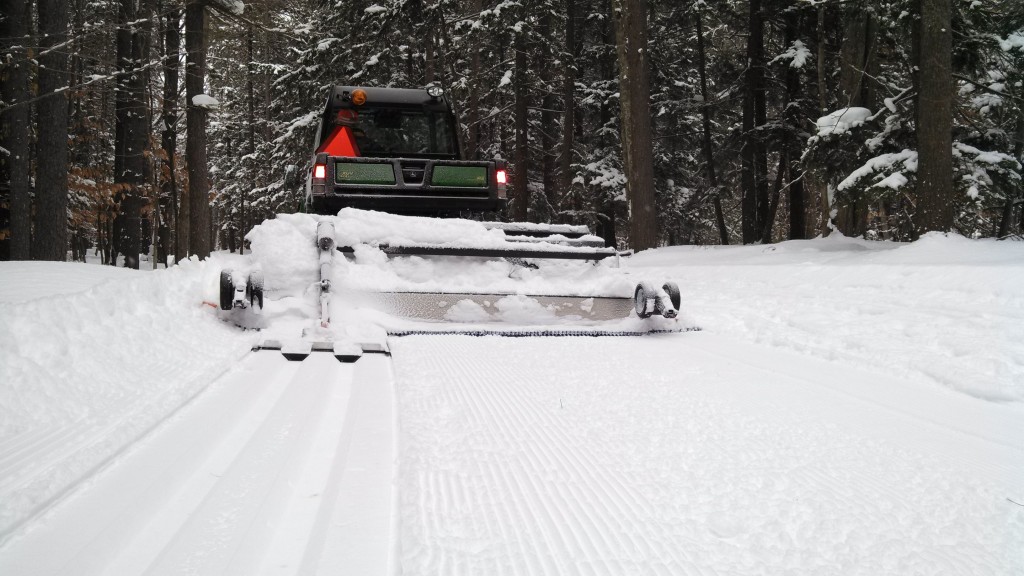 If you’d like to be added to the SBHT Winter Ski Condition Report visit Friends of Sleeping Bear Dunes. 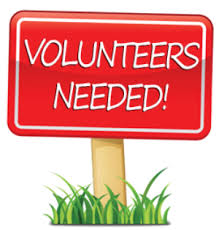 Friends of Sleeping Bear Dunes continue to work with the National Park Service Tree Crew to widen the shoulders of the Sleeping Bear Heritage Trail between Glen Arbor and DH Day Campground. This was the segment of trail hit hardest by the August 2nd storm. While the trail has been cleared to make it safe for bike riding in just a few days after the storm, trail shoulders need to be cleaned up to allow space for the groomer for cross-country skiing. The groomer requires more space on both sides of the pavement.

Volunteers are needed to help pull branches and throw them back into the woods. With enough help  a chipper can be operated, which would be the preferred method of disposing of this wall of tree branches and limbs that line the trail…

Volunteers will be working on Thursdays Oct 8th, 15th & 22nd. Volunteers and Park Tree Crew will meet at 9:00 AM at the DH Day Campground Office and will work until about 3:00 PM each Thursday. If you can only come for part of the day, please come. If you can help, please email Friends of Sleeping Bear Dunes.

The Sleeping Bear Dunes National Lakeshore was awarded a Centennial Challenge Grant, celebrating 100 years of the National Parks. Friends of Sleeping Bear Dunes are providing the matching funds required for this grant. The Grant is to assess 5 trails and 5 water areas in the Park with the intent of improving accessibility. Though just awarded, the grant deadline for completion is November 2015. Cindy Burkhour of Access to Recreation was awarded the contract for trail and beach assessment.

As part of the grant, Friends of Sleeping Bear Dunes will help by providing volunteers to assist Cindy with the assessments. The volunteers will record data, measure trail width and note trail obstructions. Cindy will train volunteers as they work.
The next Assessment days will be Friday, October 10 and Saturday, October 11. Two volunteers are needed to work with Cindy each of these days from 10:00 AM – 3:00 PM. Individuals do not have to commit to both days. However it is asked that individuals commit to a whole day.
Please bring a lunch and water. You will eat on the trail. Assessment will be done rain or shine – please dress appropriately for conditions. If you can help, please e-mail Jeanne Esch or Kathy Tuckerman.

Friends of Sleeping Bear Dunes have been working with the Park’s Natural Resources Division to select native plants to landscape the area around the Dune Climb Trailhead for the Sleeping Bear Heritage Trail. Dune grass and bearberry and a few types of trees were selected. The trees and dune grass were planted last fall but weeds and some invasive plants have taken over some of the dune grass areas.

Mary Ann and Dave Borton have been leading the effort to remove the invasive plants and weeds to give the dune grass a chance to establish itself.

They need your help! We will be working at the Dune Climb Trailhead  Wednesday, October 14 at 9:00 AM until noon. You can come for whatever amount of time you have. Bring gloves, a bucket or basket, weeding tools, etc.

Please come out and help get this part of the trail cleaned up. The work they did the last couple of weeks really looks good, but there is a lot more to be done and we could really use your help. Contact Mary Ann by phone at 708-220-1231 or by e-mail at m.a.bort@hotmail.com

For more details on these and other volunteer efforts visit the Friends of Sleeping Bear Dunes website. 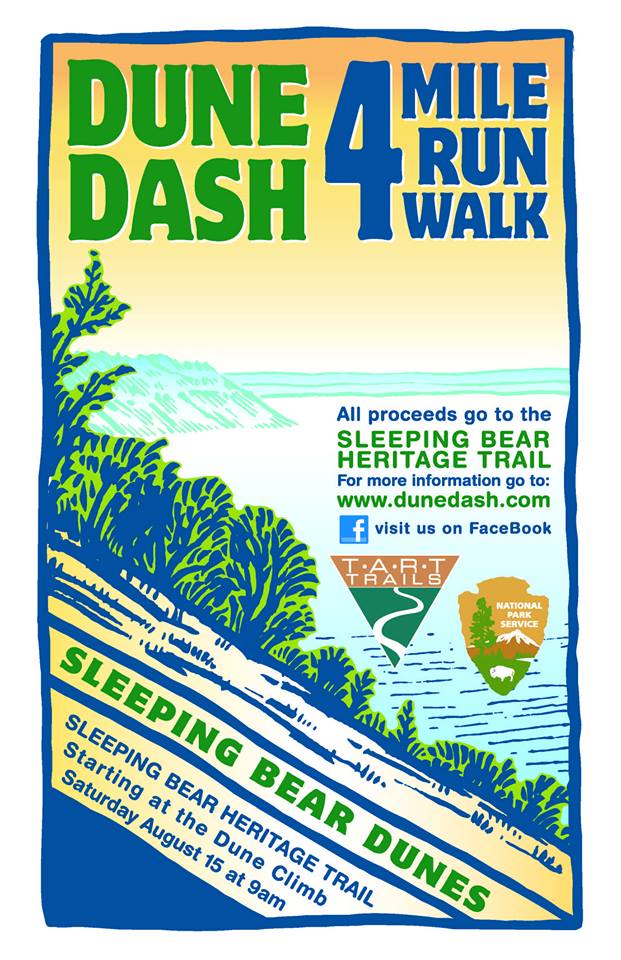 Join us for the fourth annual Dune Dash 4-mile run/walk on Saturday, August 15th. The race course showcases the Sleeping Bear Heritage Trail located in the Sleeping Bear Dunes National Lakeshore. Starting and finishing at the base of the Dune Climb, runners follow the flat, paved Sleeping Bear Heritage Trail past rolling dunes and beautiful forests to the turn around point at historic Glen Haven. Don’t miss your chance to experience what will soon be known as one of the most beautiful scenic runs in Michigan if not the country.

All proceeds from this event will go to the continued construction and maintenance of Sleeping Bear Heritage Trail. The trail has been cleared since the big storm on Sunday, August 2nd. The stretch between Glen Haven & Glen Arbor is still closed but is expected to open very soon. This closure will not affect the Dune Dash route.

A 4-mile run/walk along the Sleeping Bear Heritage Trail. (Course)

The race will start and finish at the Dune Climb in Sleeping Bear Dunes National Park. (map)

All proceeds from this event will go to support the Sleeping Bear Heritage Trail.

NOTE: Prices go up by $5 after August 13th. The Sleeping Bear Dunes charge an entrance fee of $10 per vehicle if you do not already possess a park pass.

Visit DuneDash.com for all the event details, online registration and volunteer information.

Be one of the first to participate in a new 5 mile run on August 18, 2012 showcasing the new Sleeping Bear Heritage Trail located in “the most beautiful place in America”

Starting and finishing at the Dune Climb in the Sleeping Bear Dunes, runners will race along the newly paved trail passing Michigan lakeshore and historic Glen Haven.  This will soon be known as one of the most beautiful scenic runs in Michigan, if not the country.

Organized by the creators of the Zombie Run with support of Sleeping Bear Dunes and TART Trails, the Dune Dash will be a race you won’t want to miss!

All proceeds from this event will go to the continued construction of the Sleeping Bear Heritage Trail.

More information and registration at: www.dunedash.com

After half a decade of planning, some debate, and the solidification of enthusiastic support across a broad spectrum of the public, the Sleeping Bear Heritage Trail will officially launch with a groundbreaking ceremony at the Dune Climb on Friday, August 12 at 11 a.m. When completed, the 27-mile trail will run from the southern edge of Leelanau County, through the Sleeping Bear Dunes National Lakeshore to Good Harbor Bay. The groundbreaking celebrates the upcoming construction of nearly five miles of trail between Glen Arbor and the Dune Climb, roughly parallel to M-109. Construction is scheduled to commence next spring and be completed in 2012.

The Heritage Trail will be a hard-surfaced, multi-use trail through the Lakeshore. According to Sleeping Bear Dunes Deputy Superintendent Tom Ulrich, “It will provide a new, and much-needed, recreational opportunity for us all; that is, a non-motorized trail that can be used to travel between the Lakeshore’s main visitor destinations, Glen Arbor and Empire. The SBHT will give bicyclists — as well as walkers, runners, wheelchair users and baby strollers — a safe, enjoyable and car-free way to explore the Lakeshore and neighboring communities. The Lakeshore has over 100 miles of hiking trails, but exactly zero miles of bicycle trails. The trail will be fun, and will get a lot of people out of their cars and into the outdoors.”

The trail will be a boon not just to sport bikers, but to those looking to commute without using their automobile. “I think the most exciting thing about the trail is that it’s not just a fun hike or ride, but that people can actually use it to get around the area,” says Ulrich. “I live up in Centerville Township, so I will be most excited when construction gets up to County Road 651, and I can hop on my bike and get on the trail there.”

And the Heritage Trail won’t just be usable eight months a year, as Ulrich attests.

“One of the ways I am most looking forward to using it with my family, though, is for cross-country skiing. Because the trail will be built 10 feet wide to bicycle trail standards, we will be able to groom it for classic and skate skiing; another thing we don’t currently have in the Lakeshore.”

“After five years, this amazing Leelanau Scenic Heritage Route project is taking physical shape. By this time next year, we will be able to safely bike, walk, or wheel from the Dune Climb to Glen Arbor with the opportunity to stop at other park sites in between,” says Patty O’Donnell, Sleeping Bear Heritage Trail Project Manager — Northwest Michigan Council of Governments

The trail was included in the National Lakeshore’s most recent management plan and garnered strong public support during the planning process. According to Sleeping Bear Dunes National Lakeshore Superintendent Dusty Shultz the “The Sleeping Bear Heritage Trail is the single most exciting project to come out of our recently completed General Management Plan. The trail will provide a wonderful way to explore and learn about the park, as well as become a meaningful alternative for visitors to travel between park sites and local businesses — without having to use their cars.”

Julie Clark, Executive Director of TART Trails is grateful for the strong collaboration between partners. “Many partners came together to make this trail a reality. We are very excited for the groundbreaking ceremony on August 12th as it officially launches the public fundraising effort,” said Clark.

Campaign Tri-Chair, Karen Van Nort is excited about the groundbreaking, “We are thrilled that families will have a safe place to ride their bicycles. We hope the public will join us as we kick-off this legacy trail.”

« Leelanau vignettes | Home | Into the Woods with Painter Lynn Uhlmann »